A Great Review of "Layin' It Down!"

This just in from the good people at Brooklyn Country. Take a look at the great review below and visit their website brooklyncountry.com for other reviews of great NYC country artists, and events. And we can't say thank you, thank you, thank you!


NYCity Slickers
Layin’ It Down
By JD Duarte
While on a road trip from their current New York home to the family’s birthplace in Mississippi, Faser Hardin and his wife Annie Chadwick, along with their daughter Abi heard the sounds of the old traditional bluegrass playing on the radio. They were so inspired by this authentic American roots music that upon returning to NYC they decided to explore this style and formed a bluegrass band.
NYCity Slickers are an eight-piece band currently making waves in the New York country scene. While their style is rooted in traditional bluegrass, the brand this “family” band presents on their first album Layin’ It Down shows off the unique background reflecting the range of its individual members. Having incorporated blues, rock, and various generations of country & western into their bluegrass-based songwriting, The Slickers offer a unique perspective and much-appreciated update on what is often labeled “traditional”.
With a background in theatre, the Hardin/Chadwick clan did not approach this only from the musicianship side of performance. In addition to a five-piece string band serving as the backbone, The Slickers put on one hell of a live show lead by three distinct female voices. The ladies draw the audience in through a fresh and inviting, down home welcoming presentation. Rarely do audiences stay in their seats. You’ll often find folks making way to the dance floor (even moving tables at Rodeo Bar to do so).
Layin’ It Down features thirteen songs, eight of which were written by the band and their extended family. Lead vocalists Annie Chadwick and Abi Hardin each contributed two songs to album. Chadwick’s “Gin & Blues” (inspired by Willie King’s “I Am The Blues”) reflects that traditionalism while the album’s finale, “Meltdown” highlight the sultry three-part female harmonies. Abi Hardin’s “It’s All About Me” brings the frenetic nature of young country and attributes this high-energy, progressive bluegrass band.
Contributions from Varner Stomps and Barney Chadwick on foot-stomping “Locked Out” as well as “Mississippi Home” and “Weather Girl” (with Billy Chadwick) and the Reeves Jones penned “Texas Two Step” only widen the net and display the many facets of the Slicker’s talent.
In addition to their bevy of original material, The NYCity Slickers offer up killer renditions of “Rocky Top,” a reinvention of the blues epic “Marie Laveau,” and the Billy Joel classic “Travelin’ Man” (yea, that Billy Joel).
With so much diversity at their fingertips as songwriters, instrumentalists, and performers, Layin’ It Down still has a consistency from beginning to end. And no wonder, the band recorded the album in the same way they perform- the eight members recorded live together in the studio. 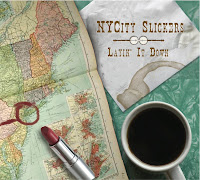 With so much talent packed into one group, The NYCity Slickers show no signs of letting up. In addition to their many local appearances, they are also set to begin touring this summer.
To purchase Layin’ It Down visit www.NYCitySlickers.com
Posted by ACH at 8:10 AM

For more info on the NYCity Slickers and all upcoming dates please go to our website www.nycityslickers.com

Promote Your Page Too